How to Play Dwindle

Dwindle is a game of vanishing options.

Dwindle has several potential modes of play. Presently, the mode that is supported is Regular Gameplay. In this mode, the object of the game is to be the last active player and to have at least one move left. This mode utilizes all the core concepts.

In Dwindle, players take turns moving a shared location chit around the board. The options available are governed by the state of the board at the time of a turn.

The destination of a move may only be a cell with a tile on it. Furthermore, it can only be in a cell that can be reached from the current cell with the current tile. Whether or not you can reach one tile from another tile depends on whether or not the source tile’s [pips] would allow travel to the target tile via the available connections.

Over the course of the game, players will be knocked out of the game. They can observe, but no longer participate in any other way. The game continues until there are no more moves or there is only one player.

Knocking a Player Out of the Game

If a player is moved to a tile that has no remaining moves, then that player is knocked out of the game. When this happens, the tile the player was on is removed from the game and it is the next player’s turn. This creates a special case where the player immediately after the knockout is given the option to move to any tile on the board.

If all players but one have been knocked out of the board and the remaining player has any potential moves, then that player is the winner and the other players are the losers.

If there are no remaining moves - that is, all tiles have been removed from the board - then the game is over and all players are the losers.

At the time of this writing, all regular gameplay boards are rectilinear and contain only bidirectional connections between cells.

The core concepts of the game are:

Many of the concepts are shown here: A player is an actor in the game. Players can be human or computer and local or remote.

The board contains everything the game except for the players. This includes cells, connections, tiles, and the location chit.

A location chit is the position of one or more players. In regular gameplay, all players share a single location chit. However, this is not a requirement of every mode of the game.

A cell is a meaningful location within the game. A cell can contain tiles or the location chit and can have connections to other cells but this doesn’t mean that every cell contains all, or even any, of these things. Some cells exist specifically to be devoid of any features. These cells are typically put in place as obstacles to create additional challenges within the game.

A connection permits travel between one cell and another. In regular gameplay, a connection is represented as a line connecting two cells.

Even if the tile in the current cell has a [pip] that points to another cell, there must be a valid sequence of connections leading from the source cell to the target cell for directional movement to be permitted.

A tile is a valid destination for a move. The tile under the location chit defines how the current player is allowed to move.

A pip adds traits to a tile. If a tile has no pips, then it confers no movement options - which typically means instant death for the player moved onto it. A pip shaped like a wedge allows travel in a ray originating at the source time and radiating in the direction pointed to by the wedge.

When it is a player’s turn and there are no more moves, that player is knocked out of the game. It is still legal for the player to observe the game to the end but the player gets no more turns.

Movement is governed by the intersection of the options allowed by the tile currently under the location chit and the options permitted by the structure of the board, itself. For instance, the below image shows certain moves that are allowed or disallowed in regular gameplay mode. 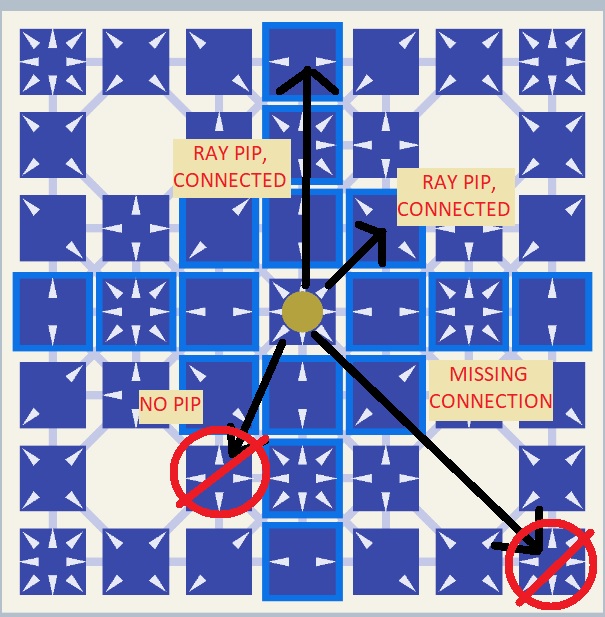 This image shows a ray pip providing access to an entire line of connected cells even if an intervening tile is missing. 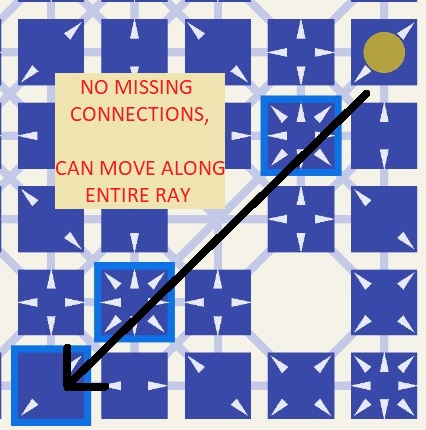